The following are "back of the envelope" type calculations for economic return of a project. These measures are quick and easy because they ignore some of the more complicated parts of evaluating a project including factors such as depreciation, time value of money and taxes.

The payback time is defined as the period of time (in years) required to break even on the initial economic investment. It is given by the equation:

is the payback time for the project,

is the total investment required for the project and

is the average annual cash flow generated by the project. This calculation is used to determine how quickly the project's fixed costs (i.e. land, machinery, etc.) can be recovered from the project. A small payback period is desirable for a new project.

The regular return on investment (ROI) involves complicated tax and depreciation calculations. However, the pre-tax ROI is much simpler. It is given by the equation:

Where ROI in this case is the pre-tax ROI, C is the pre-tax cash flow generated by the project and I is the total investment required fro the project. This calculation, as it sounds, is a measure of the percentage return on the initial investment required for a project (typically the fixed costs, explained above). A higher ROI is a more profitable project.

Project cash flows, much like it sounds, are the annualized cash flows, or revenue, generated from a new project. The first year of a project's cash flow is typically negative because the money is spent on initial investment. At first there will be a small expenditure on research and design expenses from engineering. Once the design is finished and construction is set to begin the expenditures will rapidly increase. These expenses may include things such as initial cost of renting or purchasing space/land, equipment & materials, initial labor to build a plant, etc. All in all research, design, procurement and construction, all which must be done prior to start up, will typically take 2-4 years. At this point the project will have reached maximum investment and typically has the most negative sum of cash flows.

The first year after start up, cash flows begin to become positive, however, the cash flows in the first year are usually reduced comparatively to years after. This is due to unexpected problems within the project/process. Typically machine down time, maintenance,etc. will be greatest in this year, causing the project to run under capacity. After the first year all of the problems within a process have begun to be discovered and resolved and so the process can run at full capacity with increase cash flows. From this point on, the only improvements in project cash flows come from process improvements (i.e. six sigma analysis, etc.), however, by using these techniques project cash flows can become greater year over year.

Toward the end of the life of a project, cash flows can begin to tail off in magnitude once again due to outdated equipment, new competition, or other increases in operating costs. Finally when a project is terminated there is a small additional cash flow related to the recovery from any assets such as equipment, land, etc. can all be resold or scrapped, however, there will also be some amount of costs related to deconstruction and land remediation (due to pollution or other harmful project outputs). Typically the recovered assets outweighs these costs.

A typical cash flow diagram of a project relating the cumulative cash flows over the life of the project is shown in the figure below. 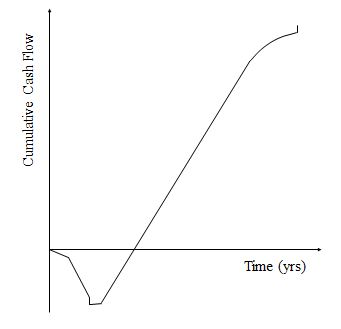 Chemical production facilities are subject to the same financial levies by the government as all corporations. Specifically, corporations typically pay income taxes, and may collect incentives based on state and federal regulations. Detailed tax filings are almost always conducted by the accounting or financial department of a corporation. When preparing process economics estimations, taxes should be included, however all final cost estimates reported to management should be prepared by the appropriate specialist (Douglas, 23).

The specific tax codes will vary from state to state, and from country to country (Peters, 303). The common factor will be that income is taxed at marginal rates. In the United States, this percentage is 35%, although the effective rate may be lower.

Corporate income taxes is a yearly expense. The percentage rate is to be applied on the income, not the revenue. See other Economics sections on the difference between income and revenue.

When conducting economic estimates of a chemical process plant, especially if the plant utilizes efficient or "green" technology, it is important to investigate any and all sources of government incentives.

Depreciation can be thought of as a yearly expense that the plant incurs. It can then be considered a cost, effectively reducing the income and thus the income tax. However, depreciation is not an actual cash flow. There is no transfer of money.

Note how depreciation lowers the amount of taxes:

is the taxes due;

is the gross profit;

is the depreciation; and

are the taxes due.

Two commons methods of calculating depreciation are discussed in the next sections.

Straight line depreciation is the most common method of approximating depreciation when calculating profitability measures, such as return on investment (Seider, 392).

In this method, the depreciable value

is written off over the total life of

years at a constant linear rate:

is each year in the lifetime.

, or the initial cost of the item minus the accumulated depreciation charges, at year

, can be defined as:

is the initial cost of the item.

For example, let us find the book value after 3 years of a compressor which originally costs $50,000, has a depreciable value of $5,000, and has a lifetime of 20 years.

Therefore we can say that over the three years, the compressor has cost the process a difference of $750, which can be taken out of the taxable income.

Money that is available now is inherently more valuable than the same amount in the future, because that money could be used as capital for an investment that earns interest.

Capital that is available in the future is said to be "discounted". The present value of money, which is discussed in further detail in the coming sections, is a discounted amount of the future value:

is the Present value,

is the Future value, and

is the discount factor.

The discount factor, which takes into account an estimated interest rate gained on present money, is calculated for every year

This implies that the a given amount of money in the future has less value as the length of future time increases, and as the expected amount of interest that current capital could gain increases. See Net Present Value for more information on this subject.

Of additional interest is the different between the time value of money and inflation. It is important to note that these two concepts are completely different. Inflation is the yearly rate at which the price of a certain good will increase (Biegler, 169). Although the mathematics and calculations are similar, inflation is generally a result of socioeconomic factors increasing the supply of money, and not the potential interest rate gained on current capital.

As discussed above, the value of money is directly related to time, insofar as $500 today is worth more than $500 in two years. Discounted cash flow methods, such as net present value (NPV) and internal rate of return (IRR) take the time value of money into account. The main difference between nondiscounted and discounted cash flows is that all cash flows are related to time zero in the latter.(Turton 266).

Net Present Value (NPV), also known as Net Present Worth (NPW), gives the present value of all payments and provides a basis of comparison for projects with different payment schedules but similar lifetimes. (Biegler 151). In making comparisons between projects, the larger the net present worth, the more favorable the investment. (Peters 328). It is one of the most widely used economic measures because it captures the time value of money, the value of investment incentives and variations in construction schedule, while allowing for price forecast models that include cyclic behavior. The NPV can be represented as:

= cash flow in year n and

= project lifetime and i is the discount rate as a decimal. (Towler 407). If the net present value is equal to zero, the return of the project is equal to the return that the discount rate would provide. (Peters 328). There are several drawbacks to NPV; it does not measure bang for buck, and it cannot be optimized unless an upper bound is set to the plant size.

The DCFROR is the interest or discount rate for which the NPV is equal to zero. (Turton 270). This means that DCFROR represents the highest after tax interest rate at which the project can break even. Often, corporation management will set an "internal" interest rate, which is the lowest rate of return that a company will accept for any new investment. If the DCFROR is greater than this internal rate, the investment is favorable. NPV and DCFROR are almost always used together. (Peters 328). The DCFROR can be represented as:

DPP is the time required, after start-up, to recover the fixed capital costs required for a project with all cash flows discount back to time zero. (Turton 268). The project with the shortest discounted payback period is the most desirable.

Annualized Cost is another way of comparing capital expenses with future cash flows where the capital expense is converted into a recurring annual capital charge. It is useful for comparing the cost of assets with different lifetimes. (Towler 411). This is very similar to the way that mortgages are amortized over a 15 or 30 year lifetime. Annual payment can be represented as:

where P is the principle investment, n is investment period, and i is the discount rate. The annual capital charge ratio can be defined as:

It is the fraction of the principle that must be paid each year to recover the investment at the target interest rate.

Measures of economic return are vital in the design phase of an engineering project. Companies will perform simulations to project capital and operating cost expenditures along with revenue generation, and use the resulting data to perform economic analyses, such as NPV and payback period. Based on the results of this analysis, the project will either be scrapped or it will be given the go ahead to begin granular design and construction. Measures of economic return provide a quick way for companies to determine the feasibility of a project, and therefore are extremely valuable.