Difference between revisions of "Environmental concerns"

All industrial processes produce waste in some form that must be carefully handled and disposed of according to regulations set down by governments at varying levels. The key areas for consideration are emissions to the land, air, and water, waste management, smells, noise, and visual impact. It is important to remember that pollution considerations are both a moral and legal obligation for any engineer or industry [1]. Emmissions from chemical plants are regulated by both local and federal governments. Plants are required to monitor and document wate streams discharged to the environment, maintain permits from local governmental agencies, and either pay fines or directly address any violations [2].

The final cost involved with waste considerations is the economic costs. In the short run, it may often be more profitable to do as little as possible to mitigate waste. However, in the long run it can often be in a company's best interest to take these factors into consideration because an optimized process or a process that makes use of recycle streams effectively will produce less waste while also saving money for the company.

Gas pollutants often come from fired heaters, boilers or flares in the form of CO2 or other sulfates and nitrates, particulates (PM10, PM2.5), Volatile Organic Compounds (VOC) and, less commonly, chlorine compounds [1]. These gaseous wastes are often under careful scrutiny from governments as well as the public since gases being released from towers are often the easiest forms of pollution for a casual observer to see. Various gas pollutants and their sources can be found in Table 1 below.

Solid, hazardous wastes are generally the easiest to control, but can also be the most difficult to safely discard; once created they can last much longer and do more damage than liquid or gaseous pollution. Table 2 below shows various types of solid wastes and how they can be treated. A more detailed description of solid waste treatment can be found in the Treatment section below. 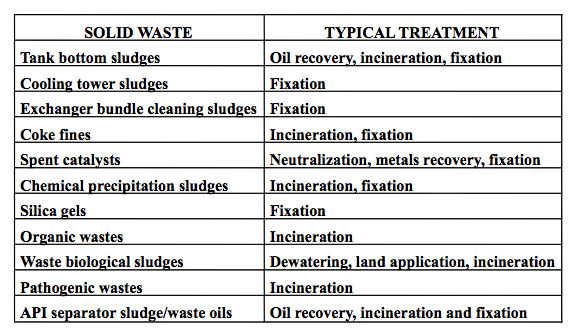 Gaseous wastes must be treated before being released into the atmosphere, especially given the recent emphasis on green processes and the growing alarm with regards to global warming. Due to the properties of gases, air pollution can be the most expensive and energy intensive. Noxious elements can often be removed by absorption or adsorption, which are the most common ways to treat gaseous wastes. Typically, there are two main classifications of air pollution control equipment: those that can physically remove particles and those associated with removing gaseous pollutants. Figure 3 compares the size and type of common particles to the method of particle analysis and appropriate cleaning equipment. 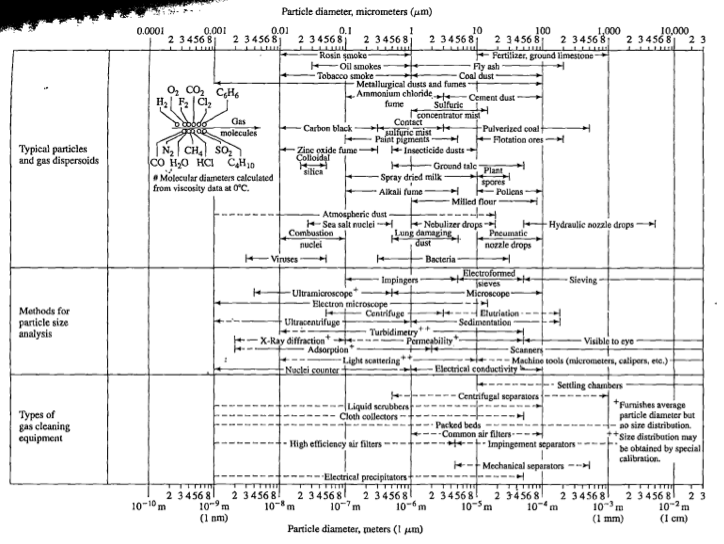 Aqueous wastes can be the most immediately harmful to the environment and people living nearby and must be sent immediately to an effluent treatment. Some of the most common, harmful water contaminants are ammonia, salts from deionizers, hydrocarbons, spent acids, caustics, and various forms of biological contamination. Utilities on-site can also create large wastewater flows that must be purged in order to prevent solid buildups. The most efficient way to deal with contaminated runoff is to collect and purify it on-site before disposing of it.

Table 2 shown above introduces several forms of solid waste disposal. The four main types are incineration, landfills, land treatment and recycle. Incineration can be one of the more expensive, but if done properly can potentially recover some fuel value. Landfills are useful for disposing large quantities of waste, but if the contents are legally classified as "hazardous", the waste must go through a pretreatment process in order to reduce the contaminants to an acceptable level. Finally, recycle can be the most profitable solution instead of disposal if the waste can be reused in another capacity.

The painting company has commissioned you to evaluate three different technologies for a reduction in VOCs: thermal incineration, catalytic incineration, and carbon absorbtion and destrcution of the VOCs. The low quality steam can be used by a nearby bottle washing plant.