is used because most heat exchangers do not implement true countercurrent contact. Design equations for heat exchangers will use generally use some form of this equation with the appropriate modifications to account for different configurations and approximations.

Process equipment and streams will need to be heated or cooled. One way to reduce consumption of utilities is to exchange heat between these streams. For example, if a product stream requires cooling, the excess heat can be used to preheat a feed stream that requires heating by using an appropriate heat exchanger. Here the costs of an additional heating and additional cooling unit are eliminated, and replaced by the cost of a heat exchanger. The associated utility requirements of the additional units are also eliminated and replaced by the utility requirements of operating the heat exchanger.

The heat exchanger must meet certain physical requirements both to carry out the specified heat exchange and operate properly as part of a system. As such, it must provide the correct area for the specified heat exchange while maintaining a reasonable pressure drop, contain the pressure of the streams, prevent leaks between the tubes and the shell, account or thermal expansion, allow for cleaning of fouling deposits, allow for thermal expansion, and phase changes in certain applications.

Heat exchangers must be able to maintain acceptable performance through prolonged contact in the materials with which heat is being exchanged. While regular maintenance and cleaning is unavoidable, appropriate construction materials should be chosen that are not prone to excessive corrosion or fouling.

Fouling on the heat transfer surface will reduce the overall heat transfer coefficient and efficiency. To maintain economical operation, the fouling will need to be periodically removed. Depending on the type of heat exchanger used, it may be disassembled and cleaned, or it will have to remain intact and be cleaned chemically, which can involve hazardous materials.

Hazards and toxicity of the streams involved must be guarded against, and safety codes must be met. Plans must be prepared to deal with leaks or failures of the heat exchanger that will minimize adverse effects.

A with any project, the ability of the heat exchanger construction to fall within the deadlines and costs is key to the economics.

The simplest heat exchanger. It is essentially a “tube-within a tube.” Only used when heat transfer requirement is small, or both fluid streams are of high pressure. One way to improve heat transfer is to add fins on the outside of the inner tube. This is used to improve the heat transfer of a fluid with a low heat transfer coefficient such as a viscous liquid or a gas, which is passed on the outer side. A more common configuration of the double pipe is with modular U-tubes in a “hairpin” configuration to conserve space. 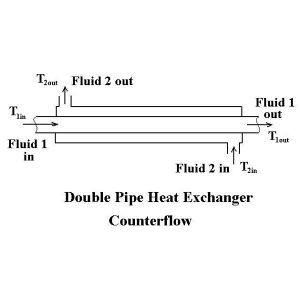 A bundle of tubes is passed through a shell. Heat exchange occurs between the fluid inside the tubes (tube-side) and the fluid outside of the tubes but within the shell (shell-side). Baffles are often used to direct the flow of the shell-side fluids as well as to support the tube bundle. TEMA has set standards for construction of shell-and-tube heat exchangers as well as nomenclature for the front heads (4 types), shells (6 types), and rear heads (8 types).

Three commonly used types of shell-and-tube heat exchangers are: the fixed-tube, U-tube, and floating-head type. Each has its own set of advantages and disadvantages. For example, the fixed-tube type exchanger has the simplest construction, which reduces construction cost and difficulty of routine cleaning. However, it may not be the most efficient. Meanwhile, the U-tube configuration allows more surface area inside the exchanger, but is more difficult to clean. Additionally, the flow pattern is not truly a counterflow pattern unless a longitudinal baffle is used (Type F shell). The U-tube configuration is more able to absorb the stress of thermal expansion than the fixed tube exchanger. Finally, the floating¬-head exchanger can move within the shell, which allows the exchanger to handle higher temperatures and pressures. However, it is more complex than the former two types, and thus construction can be approximately 25 percent higher for a unit of similar area.

The tube pitch describes the center-to-center distance for the arrangement of the tube bundle, and can be square or triangular. A larger pitch leaves more space between tubes and allows for easier cleaning, but this comes at the cost of a lower shell-side heat transfer coefficient and the need for a larger shell. A smaller pitch allows more tubes to be fit inside a given shell

The baffles lead to increased pressure drop of the shell-side fluid. However, it also improves the mixing of the fluid and increases turbulence, which leads to improved heat transfer. Again, the tradeoff between improved heat transfer and pressures drop is illustrated. The most common type of baffle is the segmental baffle. Other baffles include the disk-and-doughnut, orifice, no-tube-in-window, and triple segmental baffle.

Crystallization systems and heat transfer involving viscous fluids, fouling may occur rapidly enough to make routine cleaning impractical. In this case, a rotating blade moves over the surface, liberating the deposited material from the surface and allowing it to exit at the bottom of the exchanger. Additionally, the motion of the blade shears the deposited product close to the wall, which results in high local heat transfer rates. Scraped-surface exchangers are generally not considered unless liquid viscosity exceeds 1 Pa•s or fouling is rapid.

Plate heat exchangers consist of a stack of corrugated plates. The corrugation of the plates improves rigidity, controls spacing of the plates, and increases the heat-transfer area compared to a flat plate.The hot and cold streams flow countercurrently through the alternating spaces created by the plates. The modular design allows easy addition of more heat transfer area, but at a cost of increased pressure drop. Edges can be sealed with gaskets for lower pressures. Cleaning is relatively simple because the configuration can be disassembled and cleaned. For operating at higher pressures the edges can be welded. Welded-plate heat exchangers typically do not operate past 3 MPa. However, in welding the plates together, the convenience of disassembling and cleaning the modular plates is lost, and cleaning must be done chemically. Additionally, the plates are usually larger than those of the gasketed-plate exchanger to reduce the amount of welding necessary.

Spiral plates are coiled to create alternating passages for the fluids. The cold fluid enters at the periphery and flows towards the center, while the hot fluid enters at the center and flows outward. Introducing the cold fluid at the periphery reduces or eliminates the need for external insulation. These heat exchangers are used for small capacities with viscous, fouling, and corrosive fluids. The end plates can be removed for cleaning the shell. However, the configuration of the tube makes the spiral plates difficult to clean.