The production of products from chemical processing plants usually involve a variety of mechanical equipment. Distillation columns, reactors, heaters and condensers are some of the most prominent pieces of equipment utilized at production facilities. Mixers and splitters, however, are equally important and play crucial roles in many different types of processes.

Mixers play an important role in many different production processes, at the beginning or at the end. Some processes require several feed streams to be properly mixed before a reaction is commenced in a reactor. Other processes require that final products are blended together. Mixers serve to achieve both of these roles. Materials in all physical states are capable of being mixed together, whether it is gas mixing, liquid mixing, gas-liquid mixing or solid-liquid mixing.

In certain processes, gas to gas mixing is necessary to produce a desire product. This type of mixing is rare, however, as gases have low viscosity making them easy to mix on there own, without the assistance of a mechanical mixer. An example of gas mixing would be the mixing of oxygen, along with other gases to dilute the oxygen to desired compositions. Usually, a long pipe that contains turbulent airflow is sufficient enough to mix gases (Towler and Sinnot, 2012).

Processes that require the mixing of two liquids are very common in many industries. Several factors should be considered when determining the type of mixer needed including the degree of mixing required, if the process is a batch or continuous operation and the properties of the liquids being mixed. There are several methods by which liquid to liquid mixing can be achieved (Towler and Sinnot, 2012).

Figure 2 Inline Mixing Diagram
environment that promote the mixing of liquids. They are generally inexpensive and can be used to mix both laminar and turbulent flows. There are several types of inline mixers.

2.Stirred Tanks Stirred tanks are mixing vessels equipped with an agitation device to promote the mixing of liquids. These mixers are quite often used for mixing viscous liquids. There are several types of agitators sued for stirred tanks including turbine impellers, pitched bladed turbine, paddle, anchor and helical ribbon.

3.Side-entering Agitators Side-entering agitators are useful for mixing lower viscosity fluids in larger tanks as these sort of tanks are not very compatible for top supported agitators.

There are several different types of mechanical mixers used to achieve a homogeneous gas-liquid mixture. Some include inline mixers, stirred vessels and other static mixers. A special device called a sparger can be used for this type of mixing as well. A sparger is essentially an injection tube with multiple holes in it to disperse gas within a tube filled with a liquid (Towler and Sinnot, 2012).

Figure 5 Diagram of a Sparger

There are times when a process requires a solid to mixed with a liquid. Generally, this is due to the fact the solids are insoluble and need to be transported as a slurry. Often times, stirred tanks are used to mix these physical states. Additionally, a screw conveyor can be used. Typically, this sort of combination is mixed at atmospheric pressure with the completed mixture later being pumped at the process pressure (Towler and Sinnot, 2012).

Aspen HYSYS software is an easy to use process modeling software that allows users to design efficient systems for industrial applications. HYSYS is capable of simulating many types of equipment that most industrial processes would require, including mixers. Unfortunately, HYSYS is only able to model a generic mixer, and is not able to model a specific model. The mixer used in HSYSY simulates and ideal mixing environment (Aspen HYSYS, 2014).

Before a mixer can be simulated, the HYSYS simulation environment must be prepared. The first step is to pick a fluid package. The package chosen is based on the materials being used and the overall process being simulated. The next step is to choose components. These also, depend on what type of process is being modeled.

After a fluid package and components have been chosen, steams can be entered into the simulation environment. For the example shown in Figure 7., only two input steams are used. 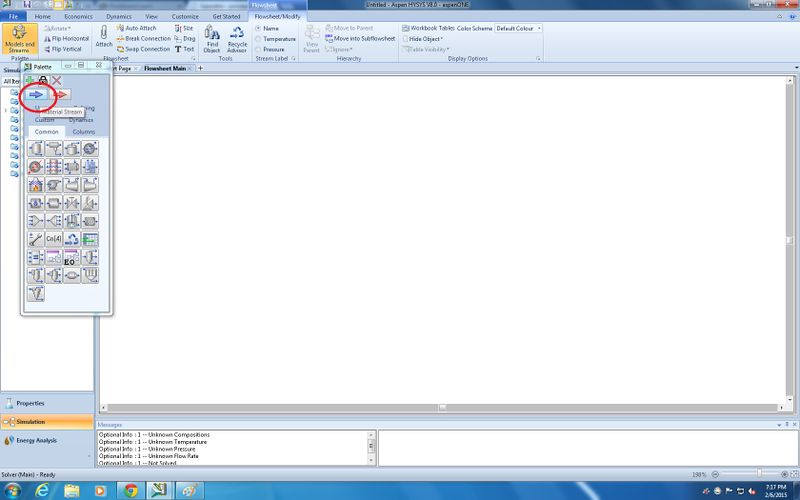 After creating the input steams, they must be specified. 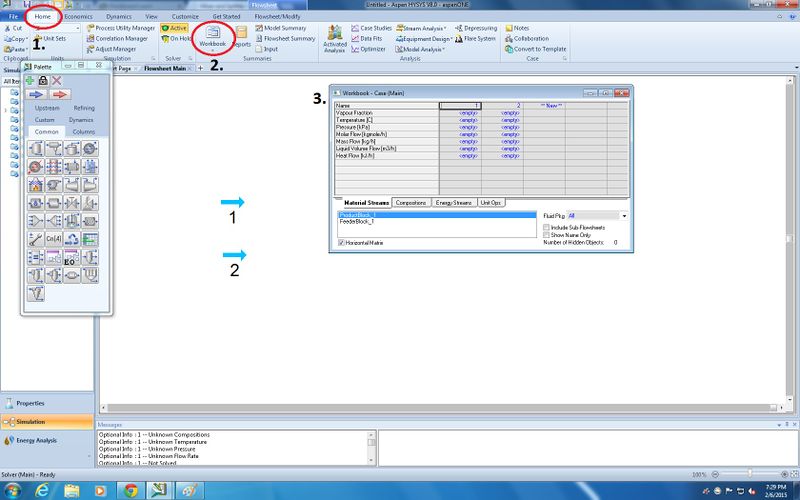 Set the compositions of the input streams by clicking on the Compositions tab located at the bottom of the Workbook. In the example shown in Figure 9, one stream is pure ethanol and one is pure water. 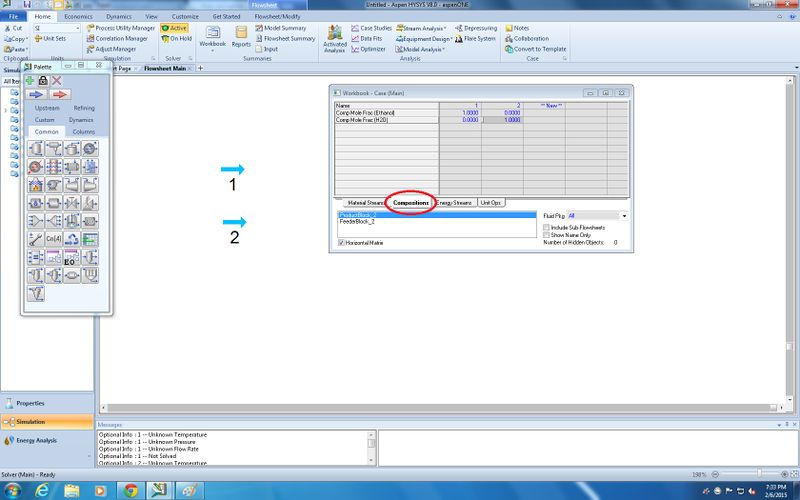 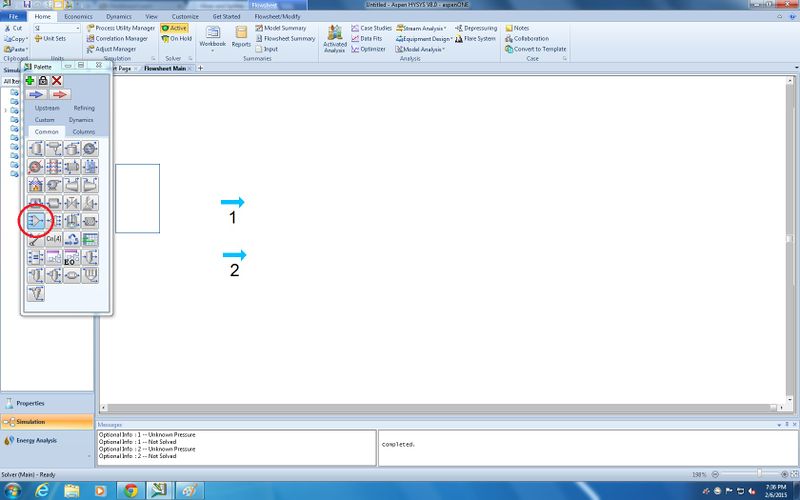 Now that the mixer is placed into the simulation environment, it must be connect to input and output streams in order to function. Figure 11 illustrates the necessary steps. 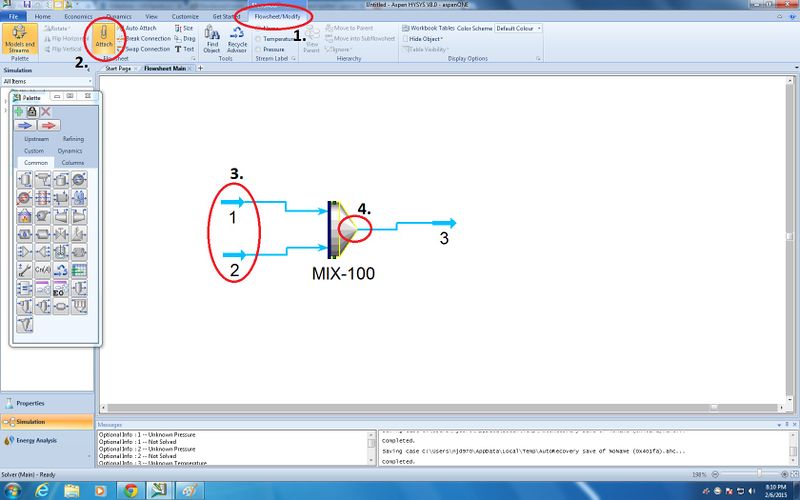 Once all the input and output streams have been connected to the mixer, go back to the Home tab and click the workbook icon as illustrated in Figure 12. The output stream should be specified and should be well mixed representation of streams 1 and stream 2. 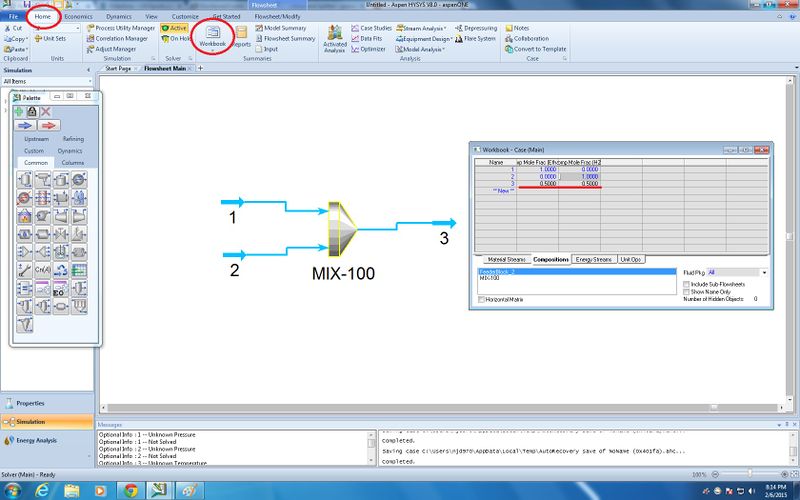 HYSYS does not offer a very comprehensive means of simulating a mixing process, however, it is able to estimate the result of multiple material streams being mixed. The results of a mixing simulation in HYSYS should not be the sole simulation used when designing a process that includes mixing, but it will assist in determining general process dynamics.