Students and young chemical engineers often find themselves relying on powerful process simulation programs for coursework or job performance without having the proper background in applied phase equilibrium thermodynamics. This lack of experience becomes obvious when either a poor choice is made in selecting a physical property package or the actual selection process is completely overlooked. Property package is aspects of equations used for the determination of physical properties of the components to simulate. It is also named the thermodynamic model. The selection of a suitable thermodynamic property package to predict the vapor-liquid equilibrium for the studied component is important, as it can affect the simulation results considerably.

During process simulation, thermodynamic property package selection should be performed in at least two steps. Firstly, as with initial process configurations, the thermodynamic model should be chosen based on heuristics (heuristics) that provide for a good base case but may or may not provide the desired level of accuracy. Secondly, based on the results of the base case simulation (complete with cost estimate), improving the accuracy of the thermodynamic property package should be prioritized relative to optimizing other design parameters such as the configuration of unit operations, optimization of specific unit operations, heat integration, and other degrees of freedom used to optimize processes. Optimization includes both economic and simulation accuracy aspects. Thermodynamic property package definition should be revisited as often as necessary during process optimization.

Selection of the Property Model

To perform an adequate selection, the various parameters of the components to take into account are proposed. With the objective of performing an adequate and responsible selection, many articles and books have been published. The more recognized medical is the one developed by the Aspen technology symbol engineer, Eric Carlson, who summarizes some main parameters for the selection in several decision trees that are shown as the following reference.

In Figure 1 the first criteria to take into account for the selection of the thermodynamic models are indicated. The polarity is an important aspect because it determines the type of molecular interaction that can take place between the substances. It can be deducted that if the polarity is high, the interaction is strong. The second parameter taken into account depends on the first one; it means, that the mixture or at least one of the component is polar it has to be considered as the substance is not an electrolyte. This parameter is relevant because the electrolytic mixtures are composed of ions obtained from salts. The application of these type of mixtures include Ash wash, neutralization, acid production and salt precipitation. 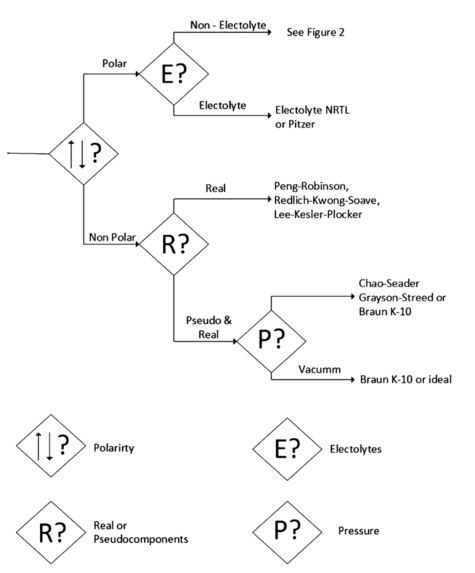 For non-polar substances, the existence of pseudo-components has to be considered. These are employed in very complex nonpolar mixtures, as is the case of petroleum, in which, since some components cannot be identified, and representation of a set of components is generated, generally classified by similar properties, like boiling point, to reduce the number of them. The properties of these pseudo-components are obtained like the average of the component's properties. In Figure 2 subsequent decision tree for a polar mixture of non-electrolytes is present. 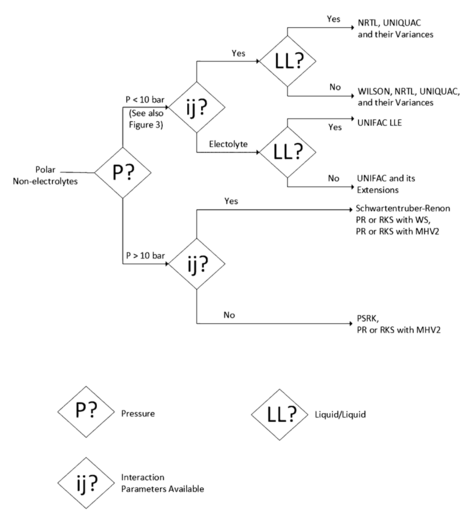 In Figure 3, a decision tree adequate for parameters related with the presence of polymers in the simulation is present. 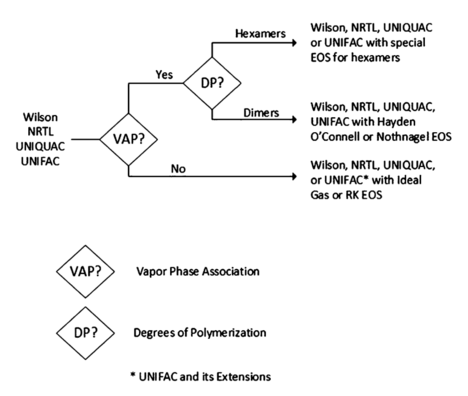 Figure 3. Options for the calculations of the vapor phase with activity coefficient model

In general, there are five main tasks for the proper representation of the physical properties:

This process may not be sequential and can be concurrent sometime. Additionally, to the correct selection of the model, it has to be correctly implemented, because there are situation,s like in the case of partial molar properties that the model does not contemplate and that may be of the importance for the modeling of an operation of process.

Thermodynamic property package selection is, appropriately, one of the first necessary steps in process simulation. These packages typically include EOSs, activity (solution) models and other more specialized models for the purpose of taking account non-idealities in vapor and liquid mixtures. Table 1 summarizes the parameters that are calculated in these approaches. Vapor pressure models (e.g. Extended Antoine equation) are generally accurate provided the parameters are not specific to a range outside that of interest. Corresponding states methods for pure component fugacity coefficients (e.g. Chao Seader Model) are typically only called upon for pure component calculations when alternatives are not available. Selection of either vapor pressure models, pure component fugacity models, or other methods such as interpolation of available data are typically performed automatically by simulation packages only as necessary and without operator interaction.

The use of reduced temperature for selecting EOS models over solution models is based on two premises. Since solutions models are specifically designed for liquid phases and are fitted to data in the conventional liquid phase as compared to near-critical fluids, solution models will tend to be more accurate than EOSs for liquids. With increasing temperatures and at a reduced temperature of about 0.75, the liquid phase begins to expand rapidly to the point where polar and hydrogen bonding forces that dominate liquid phase properties become less dominating. Since these polar and hydrogen bonding forces largely determine the binary interaction coefficients, the binary interaction coefficients become increasing invalid and the model becomes increasingly inaccurate. EOSs are specifically designed to be useful in these near-critical regions, and so, they are preferred. The best reduced temperature to use as a point of transition is dependent upon the engineer, but the use of values from 0.7 to 0.8 can be readily justified by studying compressibility charts.

The choice of which EOS is substantially personal preference provided the EOS is capable of performing the desired tasks—this typically translates to limiting the selection to cubic equations if an EOS is used to model both liquid and gas phases. When teaching design for the first time at The University of Kansas, I asked Professor Walas which equation of state was generally the best, he responded that whenever somebody develops and reports a new EOS, they claim it to be better than the previous EOS options. The SRK EOS appears to be the most favorite with the PR EOS a close second. Walas reports binary coefficients for several systems and most simulation packages have these or other binary interaction coefficients built into their databases.

Table 2 summarizes a comparison of solution models presented by Walas. These data were used to derive heuristic 4. Heuristic 4 is also based on the ability of the model to go beyond fitting data, and specifically, to the ability of the solution model to accurately account for the impact of temperature. Based on the ability to accurately account for changes in temperature, the Wilson equation was selected over the Margules equation even though the Margules equation may provide a slightly better fit to the data.

It is interesting to note that even though the development of the UNIQUAC solution model in combination with the UNIFAC group contribution was groundbreaking work, the UNIQUAC model does not consistently fit experimental data well. When using UNIFAC or other group contribution methods, different binary coefficients will be estimated based on LLE versus VLE options. The applicable options or options should be chosen during process simulation.

Selection of Model for Gas Solubility in Liquids

The equilibrium of a gas with a liquid can and should be separated into two separate types of separation problems:

The separation of volatile organic compounds from purge gases is commonly encountered in industry. For this system, the gas is typically sparingly soluble in the liquid, and because of this, solution models such as the Wilson equation accurately estimate the vapor pressure of the volatile organics. In contrast, accurate modeling of a sparingly soluble gas in a liquid is typically only achieved if experimental values are available to specify binary interaction coefficients at the low concentrations of the gas. The solubility of a gas can vary considerably depending upon the liquid. Furthermore, when comparing estimates of the SRK EOS to the Wilson equation, the estimated solubility can easily vary by greater than an order of magnitude. This second type of gas-liquid solubility problem requires further discussion to develop successful strategies.

By far, the best resolution of uncertainty issues related to the solubility of gases in liquids is to do a sensitivity study. This could be a formal simulation sensitivity study or a thought process. In many instances, equipment sizes and configurations as well as bottom-line economics are substantially not impacted even if gas solubility in a liquid is varied by two orders of magnitude. In such instances, even if the thermodynamic model is off by a factor of 10, the soundness of the design is not impacted. When the gas solubility does impact equipment design or economics data should be pursued.

Examples of Equations of state used in property package

The equations of state are models that correspond to PVT correlations that allow to estimate the properties of a pure substance or of a mixture using the Maxwell Relations; in the case of mixtures, mixing rules design for that purpose are employed.

Introduced in 1949, the Redlich-Kwong (RK) equation was a substantial improvement with respect to other equation of its time. It is still focus of attention due to its relative simple expression.

Although it is better than the Van der Waals equation, it does not provide good results for the liquid phase, and therefore it cannot be used for vapor liquid Thermodynamic and Property Models equilibrium calculations. Nonetheless, in such cases it can be employed jointly with concrete expressions for the liquid phase.

The corresponding model is presented as follows:

of the Redlich-Kwong equation with the expression

, function of the temperature, and the acentric factor. The _ function was conceived to fit with the vapor pressure data of hydrocarbons; this equation describes accurately the behavior of those substances. It can be used to correctly represent both liquid and vapor phases.

The model with the corresponding correction is shown below:

The advantage of using this model in a simulation package are

The Peng-Robinson equation was developed in 1976 to accomplish the following objectives:

Generally the Peng-Robinson equation provides results similar to those of the Soave equation, although it is better to predict the densities of many components in the liquid phase, especially those that are nonpolar.

The previously mentioned model is presented as follows:

The advantages of using this model in a simulation package are:

Note that the factors a,b and

are similar to those proposed by Soave-Redlich-Kwong (SRK), but correcting the constants to improve its precision.

The following additional heuristics will provide guidance as to the priority that should be placed on improving the thermodynamic model accuracy:

Both options can be used to present a case for not expending time performing a literature search or money obtaining experimental data.

Hence, the simple but effective heuristic 8 provides a useful guide as to the need to expend additional time in defining thermodynamic models. The value of 1.3 as a decision point is justified; however, the range of values from about 1.2 to 2.0 could be considered a transitory range where values less than 1.2 would have very little error while values greater than 2.0 could easily have considerable error.

When a system exhibits LLE, infinite dilution activity coefficients are typically >7.0. In such instances even small errors in the activity coefficients may lead to inaccurate prediction of the existence of LLE or the compositions of the LLE. For these applications, a sensitivity analysis can provide insight into how a typical solution model inaccuracy would impact process designs.

Thermodynamic modeling including the selection of the best models for use with process simulation is a recognized topic is chemical engineering that is held in the same regard as process simulation. However, richness and complexity of the phase equilibrium topic should not prevent engineers from using heuristics as a starting point for tapping into the ability of powerful simulation packages.