Difference between revisions of "Shale Gas to Ethylene (G2)"

The fluid package used for the main case of the simulation was Peng-Robinson (PR) which was chosen because it is most compatible with hydrocarbons (National Technical Institute of Athens). However, PR is not compatible with the absorbent, diethylamine (DEA), that is required in the acid gas removal portion of the process. Thus, it was necessary to simulate the acid gas removal (CO2 absorption column & DEA recovery distillation column) in a sub-flowsheet that utilizes the amine fluid package.4 All other processes were simulated within the main case.

The first step in the process is the removal of carbon dioxide from the inlet shale gas. This is done with an absorption column with DEA as the absorbent. The inlet shale gas is fed into the absorption column, T-100, at a flow rate of 171,200 kg/hr, at 6900 kPa (1000psi) and around 50C (Transform Software and Services). The composition of the inlet shale is shown in Table 1 of the Appendix A (American Petroleum Institute, 2011). Recycled aqueous diethylamine is fed into the column at similar temperature and pressure (Oli Systems, Inc.). The vapor exiting the top of the column is the shale gas without CO2 and comes out the column at 170,000 kg/hr, with a temperature of around 55C and pressure of 6700 kPa. The absorber reduces the CO2 component fraction in the shale gas from 0.66 to 0.04 mol%.

The bottoms, the spent DEA, exit from the column at 32,400 kg/hr at a temperature around 50C and pressure of 6800 kPa. The spent DEA is sent through a distillation column, T-101, in order to regenerate the DEA and minimize material cost. However, the pressure of the spent DEA must first be brought down to 202 kPa for distillation to be viable.7 The distillate is CO2 vapor and the bottoms are recovered DEA. The bottoms are mixed with 900 kg/hr makeup water to compensate for water loss in the tops, pumped back up to 6895 kPa, and then reenter the absorption column. All of the DEA is recovered. The distillation column reduces the CO2 component fraction in the DEA stream from 4.73 to 0.93 mol%. 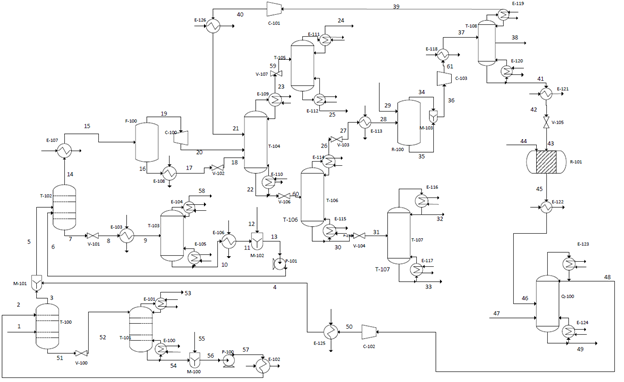 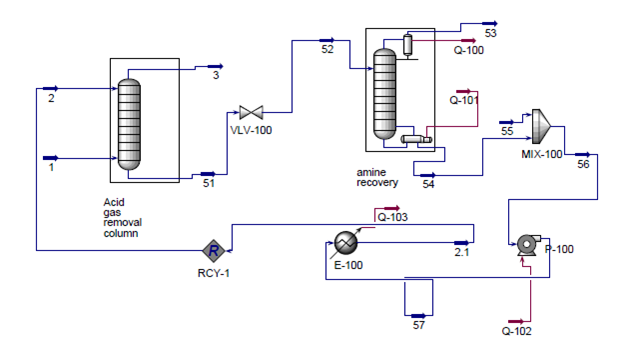