Difference between revisions of "Site condition and design"

One of the first and most important decisions when designing a chemical plant is plant location. If a new plant is being built, a suitable site must be found and a plant layout considered. However, if the chemical plant is being built on the site of an old plant (possible upgrade or expansion) the existing site’s infrastructure must be considered. Of incredible importance are local laws and ordinances concerning chemical disposal, safety of the local population, and considerations for the employed operators.

Suitable locations for chemical plants often have several plants in close proximity. The existence of these locations is often beneficial as there are often living infrastructure nearby to support the labor. Figure 1 shows the distribution of labor across the US and implicitly the common locations of many chemical plants. 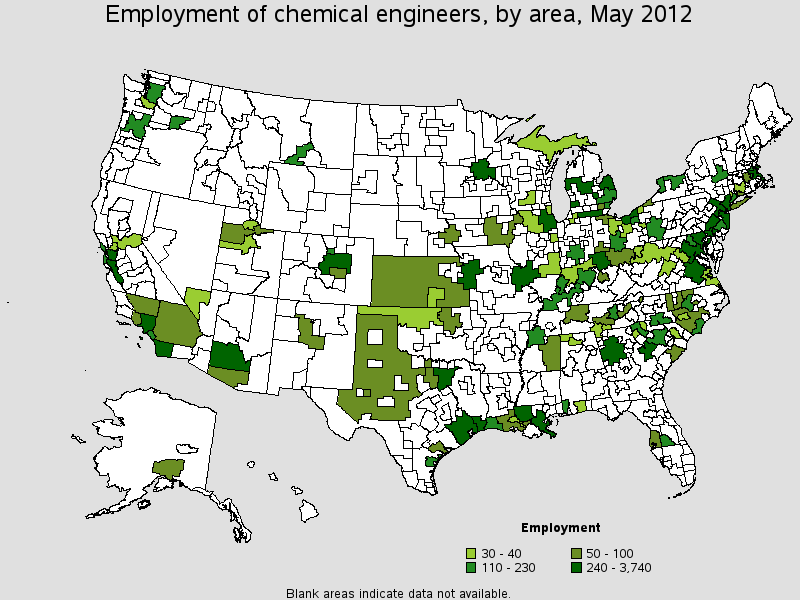 Above is shown the occupational employment density of chemical engineers separated county. It is noticeable that the coastal areas of the United States are most attractive for chemical process industries due, no doubt, to the easy access to water transportation routes, which are cheaper and faster than land transportation. Building a process plant in any of the “240-3,740” density shaded regions would capture the additional benefit of having the process plant built in an area where supporting industries already thrive, therefore making repairs and operational costs as a whole as low as possible as determined by location. The states of greatest chemical process plant density are California, Arizona, Texas, Louisiana, Mississippi, Illinois, Michigan, Indiana, Ohio, and the majority of the east coast states. The local corporate tax rates of these locations are highly dependent on income bracket as per the information found at http://www.taxadmin.org/fta/rate/corp_inc.pdf

The location surrounding a chemical plant can substantially influence its construction costs and operating costs, and may affect long-term profitability. Thus it is important to choose an appropriate location for every facility.

Major chemical plants processes need cooling system, which require immense amount of water. If river, lake, or sea is in close proximity, plants can utilize the water readily and relatively cheap. Plant needing of a great energy may build a dam on a river to resolve power issue. Upstream oil sectors look for oil wells to operate and drill out the oil and gas. Companies find themselves saving or making money when they build a plant near natural resources which they can take advantage.

Climate condition is an important factor when considering a plant to be built. Adverse weather conditions affect the longevity of the equipment directly. Often times, special adjustments have to be made to the plant equipment to negate the harmful climatic effect, which then increase the capital and operating cost of the plant.

Sufficiently high temperature or humidity variation may necessitate cooling or heating systems to control the ambient temperature of the plant processes. Pipes used in severely low temperature require special insulation or heating to prevent them from freezing. In a site where flooding is possible, plant should be designed in a way to minimize or prevent from flood damage. Also, plant structures have to be built stronger to withstand more force in the site where high winds and earthquakes frequently occur. Utility cost will also vary depending on the ambient temperature and humidity.

The availability and price of raw materials for feed streams often play a large part in determining the plant location. For example, many ethylene plants are built in the Middle East near supplies of natural gas.

If building a plant near raw materials is not possible, often the next determining factor is ease of transportation. For most chemicals, proximity to major road, rail, waterway, or ports are desired. For high-value products such as pharmaceuticals, proximity to air ports can be used to prevent degradation of product during transport. Ease of transportation results in cheaper logistics cost for transport between both suppliers and buyers.

Proximity to utilities are important in chemical process. Water is ubiquitous in chemical plants and are often require in substantial amounts. Construction of plants near rivers and lakes are often desired to reduce the cost of process water. If drawing from local water is not possible, cooling towers will need to be used. Electrical power is required in all plants, often requiring plants to be built on available power grids.

Federal laws will be listed as it serves as a baseline for the entire country. State and local laws sometimes are stricter than the established federal laws resulting. Property costs, property taxes, corporate income taxes, and fines also vary between states. Therefore, further consultation of the state and local laws must also be done beyond the laws listed in this text to ensure adherence to all laws required for the location of the plant. Below are several hallmark federal laws which proper treatment and disposal of waste in the air, ground, and water (Towler and Sinnott, 2013).

The Clean Air Act (CAA) was first passed in 1970 and was amended in 1990. The CAA empowers the EPA to set National Ambient Air Quality Standards (NAAQS)for the following seven contaminants:

In addition to these seven contaminatns, the CAA also empowered EPA to regulate an additional 189 hazardous air pollutants listed in the National Emission Standards for Hazardous Air Pollutants. Failure to meet NAAQS levels will result in the requirement of remediation steps to be taken to lower emissions before the plant is allowed to be operational.

The Clean Water Act was first passed in 1972 and was amended in 1977 and 1987. It seeks to achieve clean water for swimming, boating, and protecting fish and water life. This act mandates that a permit from the EPA must be issued for discharge of pollutants into navigable waters.

The Safe Drinking Water Act was passed in 1974. It empowers the EPA to set standards on the required purity of any water which could be used for drinking.

The Resource Conservation and Recovery Act

The Resource Conservation and Recovery Act was passed in 1976 to protect groundwater from contamination. This Act states that all waste producers are legally liable at any time from waste production to final disposal. Hazardous waste must be clearly labeled and tracked in transport and treated to levels specified by the EPA.

Production of waste is arises naturally in any plant and require a noticeable amount of resources to take care of. Before even considering methods of managing ways, cost can significantly be reduced by efficient management by source reduction. Below is a five-step review often conducted to minimize waste production (Towler and Sinnott, 2013):

2. Economical Impact: Determine the size of the waste stream and the cost of treatment

3. Root causes: Determine the root cause of the waste streams.

4. Modifications: Analyze the effectiveness and cost of potential solutions.

Below are some source reduction strategies which can be employed (Towler and Sinnott, 2013):

Keep in mind for all the strategies which can be employed to minimize waste production and therefore waste treatment, the overall cost must be considered. The savings from minimizing waste must be more than the additional cost implementing minimization.

There are many methods of waste treatment and safe disposal. The availability and efficiency of these methods depend heavily on location. Adherence to federal, state, and local laws may further restrict the availability, of some of these techniques. Common techniques include:

All of the above criteria ultimately influence the capital and operating costs of a plant, and its expected lifespan.

The needs of a site for a chemical process vary considerably from process to process. In general, however, all chemical plants require the following (Towler and Sinnott, 2013):

These auxiliary buildings are often referred to as ancillary structures and they are placed within a chemical process to minimize transportation of goods and personnel, and to maximize safety. The following procedure is followed when determining the site layout of a chemical process (Mecklenburgh, 1985):

1. Major process equipment is placed in a logical order to minimize transportation of process streams. Extra emphasis is placed on the separation and treatment of hazardous materials as quickly as possible.

2. Utilities such as boilers and power plants are placed to minimize transportation of utility to its use within the process. Utilities are usually consolidated into one section of the chemical plant because they are usually generated together. For example, a boiler produces high pressure steam; half the steam is sent through a turbine to generate electricity and to expand the steam into low pressure steam.

4. Storage tanks and warehouses are consolidated as much as possible. Storage of raw materials and products are stored between where they enter or exit the process and where they are shipped or received.

5. Ancillary buildings are placed to minimize time personnel spend traveling around the site.

6. Offices and labs are located as far away from hazardous processes as possible.

7. Walkways and roadways are added as needed to assist with construction and transportation during plant operation.

Site construction, along with process design, is an iterative process that follows a multi-step procedure (Mecklenburgh, 1985).

The information included in a Stage One layout is the relative position of buildings and process equipment, and any other data that may come from a preliminary case study of a particular process. Additionally, preliminary estimates by manufacturers and contractors for process equipment and ancillary structures, as well as local building codes and regulations are used in generating the Stage One Layout.

After the detailed cost information, hazard, and environmental information are approved, the Final Design layout commences. At this stage, detailed drawings of all equipment, piping, and layouts are finalized. At the conclusion of the Final Stage layout, orders with contractors are placed and fabrication of process equipment begins, and the site land is purchased. Essentially, this is the "point of no return."

The first step in constructing the plant is remediation and preparation of the land for construction of a chemical plant. This can include clearing the land of trees and vegetation, removing other natural obstacles such as boulders and ditches, implementing a drainage system, landscaping, grading to remove difficult topography, and anything else that is necessary. Site selection attempts to minimize costs associated with this step, but there is invariably some form of preparation required for every site.

The second step is to construct all roadways, sidewalks, and fences required for both plant operation and plant construction. Costs associated with this step can range from 2 to 10 percent of the total capital investment for a chemical plant (Peters et al., 2002).